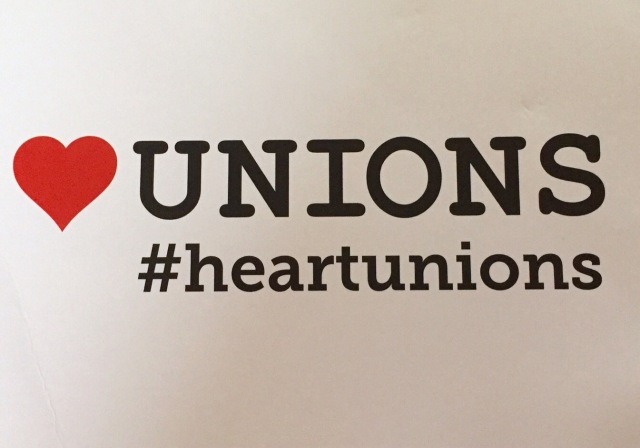 8‑14 Feb 2016 / The heartunions week of action celebrates the great work done by union reps and members in our workplaces and in society. We’re proud of our unions and reject the government’s attempts to damage them with the trade union bill.

This government is determined to shift the balance of power in the workplace in favour of employers, and get the Trade Union Bill through Parliament with as little scrutiny as possible. We must not let them get away with it.

Come to the Big Workplace Meeting on Tuesday 9th February

To find out more.

Meetings are taking place simultaneously all over the country.

It is essential that we keep up the pressure as the Bill enters its critical House of Lords stage.
The House of Lords committee and report stages (happening during February and March 2016) are the best chance to secure changes to the Trade union bill.
We need to keep the Bill at the front of politicians and journalists’ minds and to remind people why unions are so important.
From the 8th to 14th of February the TUC will run a special week of activities throughout England and Wales to showcase the amazing work unions do. This will provide a way to increase the involvement of you as union members in the campaign, build awareness of the Trade Union Bill and tell positive union stories to the wider public.